Misery
Jagged Remedy
Fifth Eye
Verse (companion)
The Scarlet Chorus are one of Kyros' many armies. Savage, primal, and ever shifting, the Chorus is one of the fiercest fighting forces in the world of Terratus.

The largest of Kyros’ forces is the loose collective of the Scarlet Chorus -- more a crazed horde than an orderly army. Led by the enigmatic Voices of Nerat, the Archon of Secrets, the Scarlet Chorus enforce the will of Kyros through sheer unstoppable fury and overwhelming numbers. Though the Chorus dates back more than a century - certainly to the time when Graven Ashe was fighting a hopeless war against Kyros, which is when he managed to almost destroy Nerat's army - it has no traditions like the Disfavored, constantly shifting, changing, and reinventing itself as it takes devastating casualties in battle, replenished with the bodies of conscripts and prisoners of war.

Nerat originally formed the Chorus in the earliest days of its (then his) ascension to power, cobbling it together from miscreants from freshly-conquered territories. Its size grew as Kyros expanded her great Empire, with Nerat tasked with subduing resistance. Those who opposed Kyros' Peace were brought to heel and given a choice: Serve Nerat or die.

The Chorus is loosely organized into gangs led by bosses, with Voices of Nerat and his gang of Crimson Spears sitting at the top of the hierarchy (or the center of the web, like fat spiders). Bosses are anyone who commands enough respect to kill the previous boss or peel away enough Choirmen to form his own. Bosses constantly appear and disappear, consistent with the philosophy of natural selection that underlies its organization. In short: Leadership within the Scarlet Chorus is simply a matter of outlasting or usurping one’s superiors, and most do not get the chance to try.[1]

Notably, when you are conscripted into the Chorus, it takes your name away. Whoever you were before, you aren't that person anymore. Then you earn back a name through great deeds - typically murderous ones. If someone has a distinct name, they have earned it. [2]

The Voices of Nerat keeps his horde in check by playing up petty rivalries and promoting a sort of Darwinian struggle. His laws are basic and mostly intuitive. The most important are:

For new recruits shoved to the front lines, 'training' means surviving the first battle. Anything beyond that is reserved for fighters who show potential, whether as martial experts or arcane casters. Those found worthy are put into rigorous training programs with zero margins of error. For example, Scarlet Furies are put through brutal training where a mistake brings death, while Blood Chanters are taught to harness blood and pain to fuel their abilities.[3]

When the Scarlet Chorus conscripts a village, they hold a ceremony known as 'the culling'. Every able-bodied man, woman, and child is given a weapon and forced to fight their family and friends to the death. Those who survive are deemed strong enough - and free from old ties - to join the army of the Voices of Nerat, where they're given a chance to earn a name, a weapon, and some semblance of a future. Similarly, when the Scarlet Chorus overtakes an enemy, the survivors are given the choice to join their ranks or perish -- leaving the Chorus mostly populated by those desperate or insane enough to accept the offer.[4] 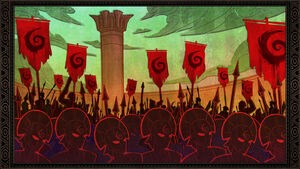 It should be noted that Voices of Nerat claims that conscripts can "Make up titles for themselves-if they can defend it" So these roles and ranks appear to be ever changing.

In non-Chorus paths, the Chorus is your main enemy in the Stone Sea and Burning Library; Jagged Remedy's gang is encountered in Trapper's Junction.