Barik (companion)
The Disfavored are one of Kyros' many armies and the embodiment of discipline and warfighting. Where the Scarlet Chorus is primal and unrestrained, the elite few of the Disfavored are stoic, obedient, and ruthlessly efficient.

As Kyros conquered the North under a single banner, there were those who resisted the call to unification. Ashe was a young bannerman at the time, petulant and inflated by pride by his own admission. He rallied the sons and daughters of the North to stand against Kyros. While Imperial armies could not stand against the forces of the Overlord, with battles routinely turning to slaughter, Ashe gathered what troops he had and retreated to the mountains. Their adaptive, pragmatic tactics and full use of advantageous terrain made them a killing shadow cast over the offensive. The uncanny resilience of Ashe's forces, including the ability to stand against the Archons of Entropy and Sorrow, fighting with sticks when their iron broke and countering sorrow with the proud songs of the North, were the first signs of Ashe's nascent power as an Archon. The women and men of his legion trained harder, marched farther, and endured more the longer he led them. His soldiers credited him with this new advantage: Ashe had given them total commitment, and they felt protected and strengthened by his presence. Ashe attributed the performance of the legion to their training and breeding, but soon it became clear that something greater was afoot.[1]

Kyros finally noticed that Ashe's influence over the troops was a demonstrable threat when Graven Ashe slew Blood Ruin in a battle described as the greatest of the Age. Though Ashe ultimately emerged triumphant – claiming the mantle of Archon of War – he and his army were weakened by the battle. A relentless offensive by the Overlord, consisting of every army she could spare was sent after Ashe and his legion - all but sacrificing the Scarlet Chorus in the process. Ashe was apprehended eventually, but not until his army lay broken. and Ashe was captured by other Archons loyal to Kyros.[2] They brought him in chains before Tunon. He said that enemies of Kyros would all be put to the sword unless he took that one opportunity to surrender and join the fold. Ashe seized the opportunity, pragmatically believing that life and service to the Overlord, and the lives of the men and women who survived the onslaught, were more important than his pride. So he bent the knee and swore obedience, which led to his name from then on to be known as Graven Ashe - a joke at his expense by the other Archons.[1] Perhaps as a result of his humbling experiences, Ashe is a realist, a pragmatist, and his ego is only slightly inflated - a rare trait in Archons. He listens to the Court and the advice of his Iron Guard, making him a rare kind of leader indeed.[3]

As a result, the remnants of his army were granted the rights of Kyros' Peace, and we lived on as servants of the Overlord. Ashe reformed the remnants of his legion into an elite troop representing all that the North holds dear: Perfect training, rigid discipline, respect for the law, and family.[4] However, since they had transgressed and rebelled against the offering of Kyros' protection, his elite legion was stripped of their decorated name and dubbed 'Disfavored,' a mocking reminder of past crimes. Despite a century of fighting, Kyros' favor is still elusive and Ashe and his men continue to labor to win back the Overlord's love.[1] 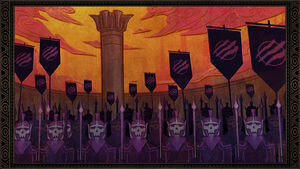 As part of Kyros' vast armies, the Disfavored represent the finest the Empire has to offer. Only the finest of trained warriors are accepted into The Disfavored, the elite army led by Graven Ashe, Archon of War. Though they are the smallest of Kyros’ forces in number (barely 10,000 departed the Northern Empire to conquer the Tiers, and the Disfavored in country today were part of that original muster), their superior training and unparalleled discipline make them more than a match for any army who would oppose them. The Disfavored believe first and foremost in order and discipline, and do not act with cruelty. However, against any who would violate Kyros’ law, they are without mercy or pity, and are not above any brutal tactic or method to secure a victory -- for in the end, that is all that matters.[5]

The Disfavored are designed to be more than a mere army. Under Ashe's leadership, the legion represents everything the North holds dear: Rigid discipline, training to perfection, respect for law, and the importance of family. As conquerors, they are to teach the savage lands not just how to live up to the values the Empire sets, but how to live for them. Every member of the Disfavored is precious to Ashe and each other, effectively becoming family members. Their bloodlines are known and respected, their performance in combat beyond every expectation, and notably, Ashe would go to any length to support them.[6]

Many of the legionaries scar themselves with the sigil of the Great General, as Ashe is called, in order to bind their loyalty into their flesh and blood.[7]

The Disfavored are an elite unit that recruits only Northerners. The underlying idea is to ensure that every member of the legion is tied to each other not just through their oaths of fealty, but also blood. Families that stood beside Ashe as he faced Kyros and bent knee together with him are highly respected, although their members are expected to hold their own.[8]

Of course, the exclusive nature of recruitment has several drawbacks. First, the Disfavored have limited numbers and a relatively small recruitment pool, resulting in great difficulties when it comes to replacing battlefield losses. Ashe's Aegis helps in preserving the extant fighting force, as does the tendency to go to great lengths to save captured Disfavored legionaries. Ashe's protectiveness of the men and women under his command is also ruthlessly exploited by cunning enemies, who would force the Disfavored to retreat by threatening them with irreplaceable casualties or trade captives in exchange for truce. Ashe himself can also sabotage the Disfavored with his fatherly tendencies, as was the case when he ordered an assault on Sentinel Stand in 430 TR, losing several cohorts to the Edict of Storms.[9]

Second, this largely arbitrary limitation leads to prejudice against people living outside the Northern Empire, in particular the denizens of the Tiers. Graven Ashe and his legion consider themselves to be the defenders of civilization fighting against barbaric hordes, believing that the end justifies the means. As a result, the Disfavored are ruthless in their conduct towards the enemy and conquered populations, giving no quarter. Prisoners of war are conscripted as working slaves or put to the sword, villages are put under martial law with capital punishment being common, and any defiance is punished by collective reprisals and destruction of property - up to and including destroying entire towns.[10]

Both of these factors make the Disfavored highly unpopular among the conquered and vanquished. In several cases, the refusal of the Disfavored to take on southerners as fighting thralls has prolonged the conflict. Such was the case in Vendrien's Well, where the Vendrien Guard would've surrendered to the Disfavored if the legion accepted them as slave warriors, rather than offal or menial laborers. The policies also strain relations with the Earthshakers, half of whom are highly trained southerners. If it wasn't for Cairn's interference and protection under Magician's Folly, Ashe would've put the south-born mages to the sword long ago.[11]

While the Disfavored don't have codified laws, there are three principles all are expected to follow:

The result of this is that the Archon of War is capable of shielding his soldiers from injury and fatigue. This protective influence exerts itself even from far away or as he sleeps (if he sleeps - rumors disagree). Few understand how this arcane power works, but all who have faced the Disfavored in battle will attest that Ashe's soldiers can survive serious harm and shrug off the fatigue of starvation or long marches in heavy armor. When the Disfavored are wounded, Ashe's Aegis (as some refer to the Archon's unique power) appears to help the soldiers swiftly recuperate and return to battle.

The price that Ashe pays for this protection is not known to others. To spare his soldiers their suffering, Ashe takes on their suffering, literally. Every wound a Disfavored takes, from mildest cuts to the scorching of the skin and breaking of bones, Ashe feels and takes upon himself - up to and including death. While this bond grants Ashe the undying loyalty of his troops, it also makes him suffer - and for the better part of the century, Ashe has been steadily losing the ability to endure the pain. This has steadily eroded his capability to act as commander and affected the Disfavored performance in the field ever since.

In non-Disfavored paths (especially the Rebel path), the Disfavored will be a tenacious enemy in Blade Grave. Also, at higher levels, Ashe's Aegis heals for a lot of hitpoints; be prepared to spend time grinding down any Disfavored soldier.