Character creation is the initial setup of your Fatebinder, also responsible for generating the world they will inhabit.

The second includes customizing the player avatar, including type and color of hair, tattoos, voice type, and selecting a portrait.

This stage lays out the basics of your character, determining which skills you receive.

How did you join Kyros' army?[]

Which weapons did you focus on during training? Note that selecting the same skill twice gives you a new weapon and doubles the amount of skill points in the affected skills, increasing proficiency.

These purely cosmetic stages allow you to select your character's color scheme (for gear and clothes) as well as their personal banner. Finally, you get to name the Fatebinder (Nameless Ones need not apply). 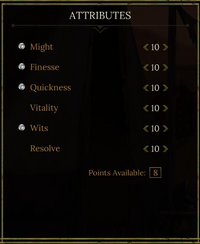 At this stage you can distribute points among your attributes. Each starts at the average value of 10 and you have an additional 8 points to use. Attributes can be reduced down to a minimal value (8), increasing the number of points available.

The game will automatically suggest attributes based on your Fatebinder's weapon expertise choices.

You receive an additional 20 points to distribute among the twelve available skills. The game will automatically suggest the most important skills.

Whereas previous stages defined the character you play, this stage defines the world you will play in. There are two options: Conquest and Quick Start, with the former giving you control over the Fatebinder's conduct during the conquest of the tiers, while the latter allows you to choose from one of Obsidian's pre-made Fatebinder templates.